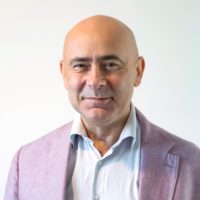 Pierre- Alain Bosc is the Head of the Regional Sales development for Intelligence since 2013.

After having worked as an officer in the French Air Force, he entered Airbus in 2007 to develop the security services of Astrium, in the frame of the European programme COPERNICUS. He then became the CEO of Infoterro Hellias (Astrium subsidiary in Greece).

As part of his Airbus role he is president of the ENSG Géomatique foundation and is a member of the EARSC (European Association of Remote Sensing Companies) executive committee.