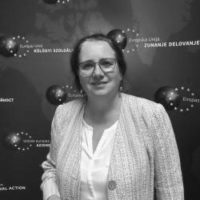 Carine Claeys is the EU Special Envoy for Space in the European External Action Service (EEAS) since 2019. She is Head of the EEAS Space Task Force (now SecDefPol.5 Space) since its inception in 2015. In this capacity:

Before the EEAS was established, Carine Claeys served in the General Secretariat of the Council of the European Union.