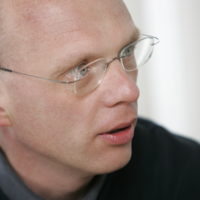 Benoit Macq received his PhD degree from UCLouvain- Belgium in 1989. He has been researcher in Philips Research Laboratory Belgium in 1990. His main research interests are image compression, image watermarking, image analysis for medical and immersive communications. Benoit Macq was General Chair of IEEE ICIP2011 in Brussels. He is the founder of the “Journal of Multimodal Interfaces” edited by Springer Verlag. He has been chair of several European projects, including a Network of Excellence on Multimodal Interactions (SIMILAR project) and an Integrated Proposal, EDcine which paved the way of the technology of digital cinema in the European Union. He is the co-founder of 11 spin-off companies. Benoit Macq is Fellow Member of the IEEE and Member of the Royal Academy of Science of Belgium. He is currently Senior Editor Associate of IEEE Trans on Image Processing.