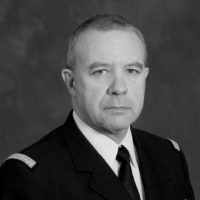 General Jean-Daniel Testé is an intelligence officer, analyst and image interpreter in the French Air Force, from the Lieutenant Saint-Hillier class of the Air Force Academy. He has divided his career between two main areas: intelligence and space.

After several years as an image analyst at the Saint Cyr l’école air base, he completed his studies at the ENSEEIHT in Toulouse to specialize in computer science and information processing. He then joined the program team of the first military observation satellite HELIOS 1 in which he was particularly involved in employment and operations. He spent 4 years working at the CNES in Toulouse in the stationkeeping center of this satellite before joining the war school in Paris.

At the end of his studies, he was assigned to the general plans office of the Air Force staff responsible for intelligence and space for the Air Force. He then commanded the Joint Geographic Office and the 367 air base in Cayenne, French Guiana.

Auditor of the 60th session of the IHEDN (57th session of the CHEM), he served as deputy director of operations of the Directorate of Military Intelligence before taking command of the Joint Space Command from July 2014 to July 2017.He now co-directs the company L’OBSERVATION DE LA TERRE APPLIQUEE OTA specializing in consulting and training in military space applications and security in space.

Currently, he is Managing Director at AEROSPACELAB France.

He is a Commander in the National Order of Merit and Officer of the Legion of Honor.